So recently the Syntax.fm podcast did an episode on their office setups where they talked about their gear. Part of that was Scott & Wes sharing the fact that they have pages on their sites where they list the gear they use for work (Scott's, Wes's).

I thought it'd be funny to throw together something similar for myself, since I'm very much a thrifty "use bare bones super cheap old junk" guy. 😄

July 2019 Update - This article was originally written in Aug 2018, I've gotten some new toys since then, so I've updated as appropriate. Still all very much tongue-in-cheek.

March 2021 Update - This was well out of date, so I've revised again. Maybe at some point I'll start a Changelog.md for this file. 😉

When I work at home (either on CDC or working from home for my day job), I have a room set up in my house that I work out of. 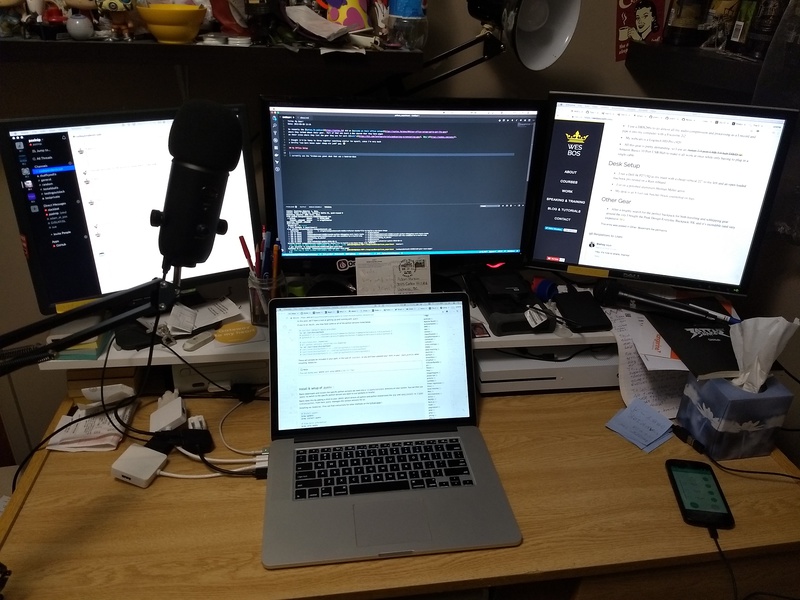 I currently use the "broken-ass giant desk that was a hand-me-down from someone in my building when I was a teenager" desk. It weighs a metric ton, is ugly, the keyboard tray broke years ago, but works. 😄

Kidding aside, I actually prefer having the shelf over monitor arms as it allows me to have a spot for my Xboxen below the shelf, and some room for various items on top of the shelf.

For monitors I have the following:

The W2243T was a leftover from an organization trying to get rid of old hardware. It's effectively my "primary" monitor, and is used for both work and for gaming. The other two are more for secondary screen real estate.

The silly bit is that the LG W2442 is definitely a superior monitor, only reason it's not my primary is I've been too lazy to rewire the Xbox from the W2243T. 😕

Typically on the left screen (the Samsung) I have Slack open, on the right screen (the W2442PA) I have a browser or my password manager open, and I use the middle LG for writing code on. This very much varies depending on what I'm doing though.

It's worth noting that I use Rectangle for hotkeys that allow me to very quickly move apps around between monitors (this is why I actually prefer a larger number of poor quality monitors over one large high quality monitor).

In terms of actual computers, for my day job I have a 17" 2019 Macbook Pro with 32GB of RAM. It's big, loud, and works really well for doing development. For non-day job stuff, I recently acquired a 13" M1-powered Macbook Air with 16GB of RAM. I love this machine, and it has quickly become a very well-used piece of hardware. My only criticism of the MBA is that it can only drive a single external display, unlike the Intel-based Pro that can drive 3 external screens.

There's also a lot of dodads plugged into my Macbooks when I work on them.

Firstly, I have the Plugable USB C to HDMI Multiport Adapter. This is functionally the same as the Apple USB-C Digital AV Multiport Adapter but about a third of the cost and works flawlessly (I used to have the Apple one from a previous job and aside from the fact one says "Pluggable" on it, I couldn't tell the difference). I also have a CableCreation USB C to HDMI + VGA Adapter as one of the monitors I use only has VGA out. Works great.

Lastly there's a ZMUIPNG USB C Hub that has HDMI, 2 USB C ports, a SD Card slot and two USB 3.0 ports. Generally this only gets used with my work Macbook Pro.

Occasionally I record videos to put on Youtube, and while at first I just used the built-in mic on the Macbook, it became very clear very quickly that I'd want to upgrade a little. As such I use the Blue Yeti Blackout which is a surprisingly good mic for a pretty cheap price (I got mine for ~$90CAD & that included a copy of Assassin's Creed Origins).

To support that mic I got a cheap foam windscreen, and a Neewer Scissor Arm. It's worth noting that while the product page for the Neewer says it doesn't work with the Yeti it in fact does.

All in, I think the total for those items was ~$130 CAD, and that's about the most extravagant part of my setup to date. If I really get into recording, this will likely be the place where I won't really be able to scrimp & will have to invest some real money.

Currently I'm using a Serta Smart Layers AIR Arlington Executive Chair It's decent, I have a herniated disc in my lower back, so I probably should invest in a better chair, but this one's a decent compromise between quality and price (it was under $200 and has some decent lumbar support). Since I've recently (since COVID) begun working from home full-time this is the next big thing for me to invest in.

In terms of smart stuff, I have an Echo Dot for the sweet, sweet Alexa assistance in our house's kitchen/family area. I don't yet have one in my office, but instead have a Google Home Mini that I got for free with a Spotify promo that sits on my desk. So far I very much like the Google Assistant better than Alexa, though both are handy.

I also have a Loonfree Wifi Smart Power Strip. It's garbage. Lasted for awhile and was convenient as it allowed me to turn all 3 monitors on/off with a press of a button in an app. However, now the off button no longer works, and my Google Assistant keeps telling me it can't reach it. At some point I'm going to switch it out for the Meross Power Strip I have, but have just been lazy (it's hard to get at the current Loonfree power bar), and also the Meross currently gets used every winter for our indoor Christmas decorations. 🤷

The desk lamp on my desk has a Phillips Hue A19 bulb in it, which is nice as I can control it from my Macbook, the Hue app on my phone, the Google Assistant in my office or the Echo Dot that's in my living room ("Why would you want to turn the light in your office on from your living room?" is a question that my wife asked as well 😜 ). I also have a Phillps Hue Lightstrip in my office as well.

Aside from the monitor, there's an old Xbox 360 and an Xbox One S that sit on my desk.

The Sony's were admittedly a splurge to treat myself when I got a new job recently. They're amazing, the noise cancelling is awesome, the battery life is wonderful and they're what I use when I work (both for calls as well as listening to music).

The Sennheiser's are also phenomenal, though wired, not wireless. They're super comfortable (I think I find them a smidge more comfortable than the XM4's), and sound great.

I also have an old set of Logitech X-540 5.1 speakers which are really quite good for the price (they were like maybe $100). Unfortunately they don't seem to make them anymore, which is a shame as Logitech used to make some really good speakers. These are what I use for sound when I play Xbox in my office (when I'm not using headphones).

My router/WAP is the Asus RT-AC5300. It's huge, has a bagillion antennas and honestly, really is incredibly overrated. I have issues with my Android phone disconnecting from the wifi, coverage in some spots of my house is poor, etc. At some point I hope to switch it out for a mesh network.

I recently (writing this in Aug 2018) retired my old Nexus 4 after using it for ~5-6 years. It ended up getting replaced by a Moto G5 Plus which is alright (TBF: my phone needs are very modest).

I run quite a bit, and started off on my fitness journey wearing a Xiaomi Mi Band, which I wore for a couple of months. The Mi Band is super good value, but it is extremely bare-bones. It's a step counter and pretty much nothing else.

In August of 2017 I upgraded to a Fitbit Charge 2 which I used extensively for almost 2 years. The gamification aspects of the Fitbit platform really pulled me in. Eventually though, the horrible battery life, extremely weak feature set, and lack of GPS wasn't meeting my needs, so in July 2019 I upgraded again.

This time I went with the Garmin Forerunner 645. Super awesome device, I seriously recommend one if you're a serious runner. If all you want is something to count steps it's overkill, but if you're fitness orientated you'll find that the Forerunner is pretty stellar. I managed to get one for 25% off because of a promo through my work's health plan, which made getting one a no-brainer.

I'm a big-time Visual Studio Code user. I started with VS Code around October of 2017 and it's now replaced pretty much everything else I've ever used (prior to VS Code I used PyCharm for Python dev, and prior to PyCharm I used Eclipse with the PyDev extension, and prior to that I used Vim).

I've heavily tweaked VS Code, have a ton of extensions & keyboard shortcuts & tweaks set up.

I still have Sublime Text installed on any machine I use, and use it for jotting "quick notes". It's a little lighter weight than VS Code, and unlike VS Code doesn't feel like it wants to be used to edit projects rather than just individual files.

I use iTerm2 as my terminal, and have been (happily) using it for years. Bash is my shell (side note: I have tried Fish & Zsh but found I've invested so much in Bash that I'm not really interested in switching).

For the videos I have on Youtube, I recorded them all using just Quicktime & iMovie (ie the free stuff that comes with OSX). Sometimes I've had to edit some audio, and for that Audacity is tough to beat.

I definitely feel like iMovie is cumbersome, so may very well invest in something better for editing later.

Ok, so this was a bit playful, but honestly, I take a bit of pride in not spending a fortune on the gear I use. Often people in tech can be caught up with the latest & greatest (and most expensive), but you can do a lot with not a ton of money.

In any case, there you have it, some of the gear I use. Did I miss anything? Lemme know